This is part of a series on meat. I recommend reading the first part, Your Meat Sucks, before continuing with this article.

Risking sounding immodest, whenever I serve meat to friends and family, the first thing anyone says immediately upon tasting it is, “Wow.” After some processing time, they’ll follow up with a question: “What did you put in this?” My response, to their general amazement is, “Salt.” Strangely, no one has ever asked exactly how I cooked the meat they think is so delicious. The point, then, is not what you add to the meat that’s important, but rather it’s the meat itself and how you choose to cook it. No marinades, no additional seasonings are required, aside from salt, if you’re using good ingredients and you know how to cook them.

What qualifies as a “good” ingredient is actually rather poetic. Animals that have been humanely treated (that is, treated with goodness), taste better as a rule. Animals that eat a natural, diverse diet taste better still. Happy, healthy animals are tasty animals, a concept that should be surprising to no one. But this article is not about big concepts (as was the previous in this series); it’s about specific cooking methods and techniques to give that wow factor to your meat.

There are basically two constellations of considerations when working with meat: Very simply, how to prepare meat for cooking and how to cook meat. Interestingly, the physical process obviously starts with preparing meat for cooking, then cooking the meat to arrive at the final product. However, the planning process actually proceeds in reverse: You have to think about what you wish your final product to be first, then determine what cooking method to employ to get there and, lastly, think through what preparation method will best support your chosen cooking method. 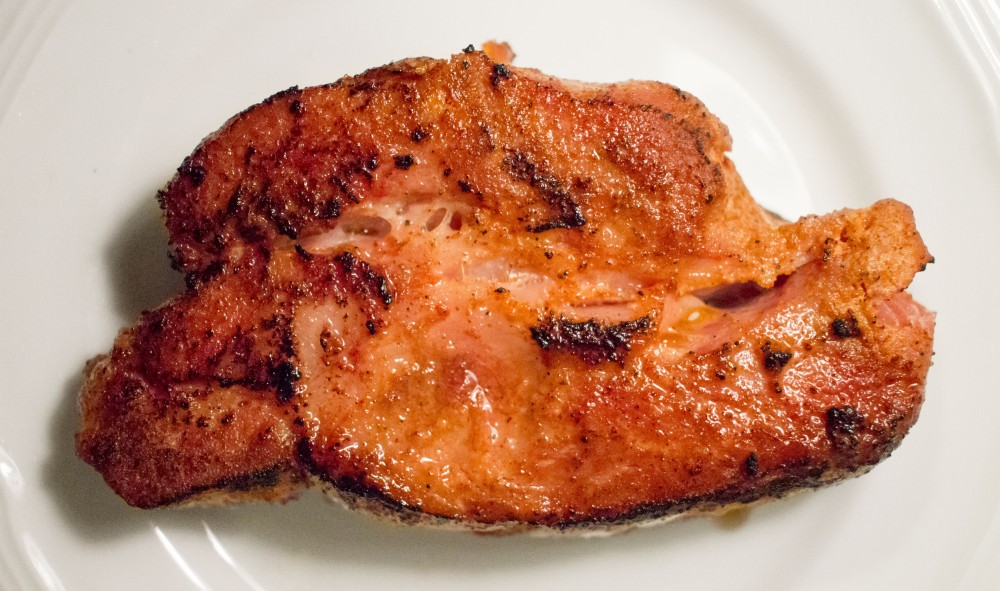 There are basically three dimension to consider when selecting what you want in terms of your meat, which is to say your cooking outcome. As I’ve previously discussed in this series, the main things that need to be considered when cooking meat are browning, flavor concentration and texture. The level of browning can vary from none at all (that is, delicate cooking) through moderate browning and into heavy browning and charring. The flavor concentration of meat can vary from light to heavy and the texture can vary from firm and dry through soft and succulent to fall apart tender.

Given that each of these dimensions varies on a spectrum, we could theoretically have an infinite number of permutations. Assuming we limit ourselves to just the three discrete categories I outline above, we’re still left with 27 different permutations. So does that mean we have to memorize, at a minimum, 27 different ways to cook meat? Thankfully not, since only a handful of permutations actually taste delicious.

As the chart above illustrates, a good way to organize your thoughts on this is more towards understanding what to avoid when cooking in certain ways. For example, if you decide that you want to cook a chicken breast delicately, you should probably avoid firm texture, since the higher internal temperatures required to achieve firmness also breaks down certain flavor molecules within the meat. Firm meat is generally less complex and nuanced in flavor than succulent meat, so when you pair delicate cooking with firm texture in general, you end up with a bland outcome. Likewise, delicate cooking isn’t quite appealing with lightly flavor concentrated meat, which can occur with long duration brining, as I discuss further below. So this too should be avoided.

Furthermore, the strong flavors you introduce with charring also overwhelm lightly flavor concentrated meat, so this too should be avoided. Everything else is fair game. It’s particularly notable that well-browned meat is also the most versatile, being able to pair with anything on the flavor concentration and texture spectrum.

As I discussed in the preceding article in this series, generally when we cook, we are transferring heat energy into meat via one of four media: Air, water, oil or metal. The main differentiators between the four is the amount of heat each can hold per unit of volume, or the volumetric heat capacity, and in some cases the upper limit of how hot the substance can get. The higher the amount of heat per unit of volume and the hotter a substance can get, the more energy it can impart to food at a given temperature within a given time.

These four media are employed variously across 10 basic cooking methods. Those methods are: Poaching, braising, steaming, roasting, pan roasting, pan frying, deep frying, sautéing, pan searing and grilling. Each of these cooking methods differ across our three dimensions (browning, flavor concentration and texture) and is best suited to achieving different cooking outcomes. For example, roasting uses dry air and radiant heat to cook meat. As a result, it is best suited for moderate browning, moderate to high flavor concentration (depending on whether you use a brine and how long and how hot you’re cooking it) and succulent to fall apart texture (again, varying according to the use of brine and the length of cooking). (For a complete guide to the 10 Cooking Methods, see this PDF, also available with additional explanation below.)

One constant in preparing meat for cooking is don’t cook frozen or very cold meat. Although it need not exactly be at room temperature (15 °C/59 °F is just fine), two problems arise when you cook meat that is too cold. The first is you end up with overcooked meat on the outer layers and undercooked or even raw meat at the center. Secondly, when you put meat that cold on a really hot surface, the meat tends to contract hard and grip the cooking surface, so you get more sticking. More sticking means you lose your top layer of browning, which is self-defeating. This is the only absolute.

The other major point of preparation is seasoning the meat before you cook. Here I have many qualms, which I’ll address first. Many people, for example, advocate the use of dry rubs on meat. A dry rub is basically dried aromatic spices that you literally rub onto the surface of the meat. Dry rubs are fine in principle, but it’s worth noting that literally all of the flavor molecules in the aromatic spices that form your dry rub are too large to penetrate further than perhaps 0.25 centimeters into the meat, which is to say, only the surface. Leaving the dry rub on longer does nothing to increase the penetrative effects. What’s worse in letting the dry rub sit is that, since dry rubs almost always contain salt, liquid from the meat is drawn out. This changes the texture of the meat into something more closely resembling cured ham. That’s fine if you’re going for that texture, but we usually aren’t.

Dry rubs are also deal killers in most forms of cooking because aromatic spices burn more quickly than meat browns. As a result, you avoid developing the flavor of the meat through browning and you lose the flavor of the spices through burning. It’s a lose-lose situation. To put a finer point on this, burned spices are not delicious to say the least. They’re pungently bitter, devoid of any of their original flavor and all together undesirable. As a result, I almost never use dry rubs, not even on smoked meats. I do occasionally use a spice paste (aromatic spices buffered with a liquid like water, stock, dashi or oil) but only for sous vide cooking. 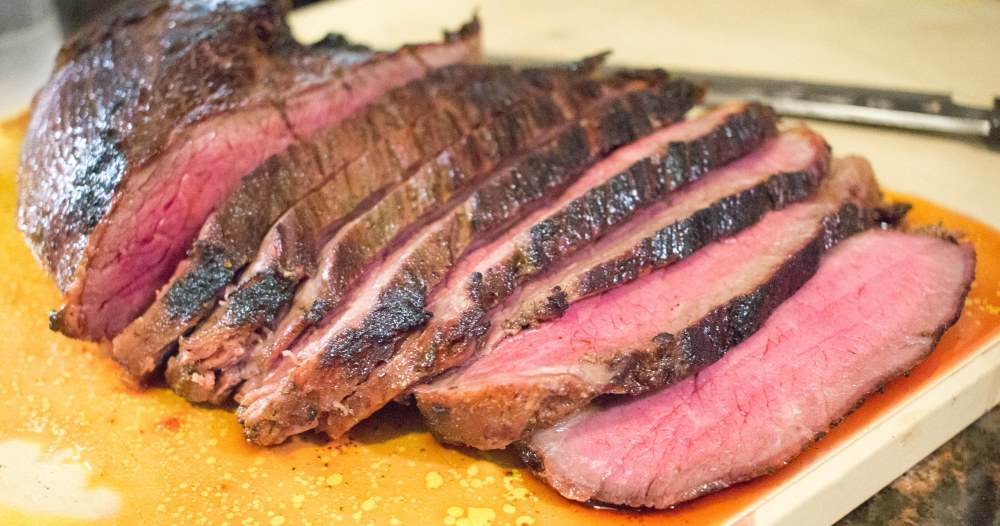 Another common way to season meat is with a marinade. Very generally, a marinade is composed of water, acid, aromatics and salt. You soak meat in a marinade to get the aromatics to flavor the meat, salt the meat to its core, make the meat juicier as it absorbs some of the water and tenderize it as the acid breaks down and softens its proteins. Marinades are better than dry rubs, but I have my qualms here too.

First of all, you don’t solve the problem of aromatic molecule size by moving said molecules into a liquid. They are still too big to penetrate further than the surface of the meat. Basically, we are wasting our time and ingredients. Also, I find acid tenderized meat to have an undesirable texture, personally, although some tend to dispute this. It’s for these reasons that I never use marinades either. It’s true, however, that the salt is absorbed down to the meat’s core and, as a result, the meat also retains additional water, becoming juicier. But we can get the salt and water benefits of a marinade without any of the drawbacks of wasted aromatics and acid tenderization. The technique, as many have heard, is called brining and it’s awesome.

Brining meat is the process of soaking it in plain and simple salt water to do only the needed work: Salt the meat to its core and draw in water for added juiciness. By my taste, bringing best brings out the beautiful, natural flavor of excellent meat. When paired with the right cooking method, this is what often sets up the framework for that wow factor.

In general, there are two brining techniques that vary in duration and by salt concentration. Each of the brining techniques achieves different results and is therefore suitable for different cooking methods. The first is quick brining. Quick brines get salt and water into meat relatively quickly (perhaps 30 minutes to an hour depending on the thickness of the meat) with the use of a higher concentration of salt and with the benefit of warmer room temperature, both of which make for faster penetration. At the other end of the spectrum is a long brine, usually lasting one to three days. Long brines make use of a lower concentration of salt and are done in the refrigerator, of course, to avoid spoilage.

In the case of a quick brine, your meat gets salted to the core and juicier without losing much of its flavor concentration via extraction back into the brine. Long brines, on the other hand, make a trade off. In addition to getting the benefits of a quick brine, you also get salt-driven tenderization. Salt breaks down proteins too, but does so more delicately and slowly. As a result, you get more homogeneous tenderization as compared to acid, which results in more pleasing texture by my taste. The downside to a long brine is that you lose a bit of flavor concentration to extraction into the brine.

In between quick and long brines is an intermediate brine, one done in the refrigerator within a few hours and at a salt concentration somewhere between quick and long. Intermediate brines should theoretically allow you to better dial in each of the competing factors more precisely and to your taste, but generally speaking, I prefer to stick to either extreme. The only other way to get salt into meat, it should be noted, is during cooking.

The following chart describes, at a high level, each of the 10 cooking methods, where each falls among the three dimensions and what each method is best suited for in terms of cooking outcome. (Click the image or here for a printable PDF version.) 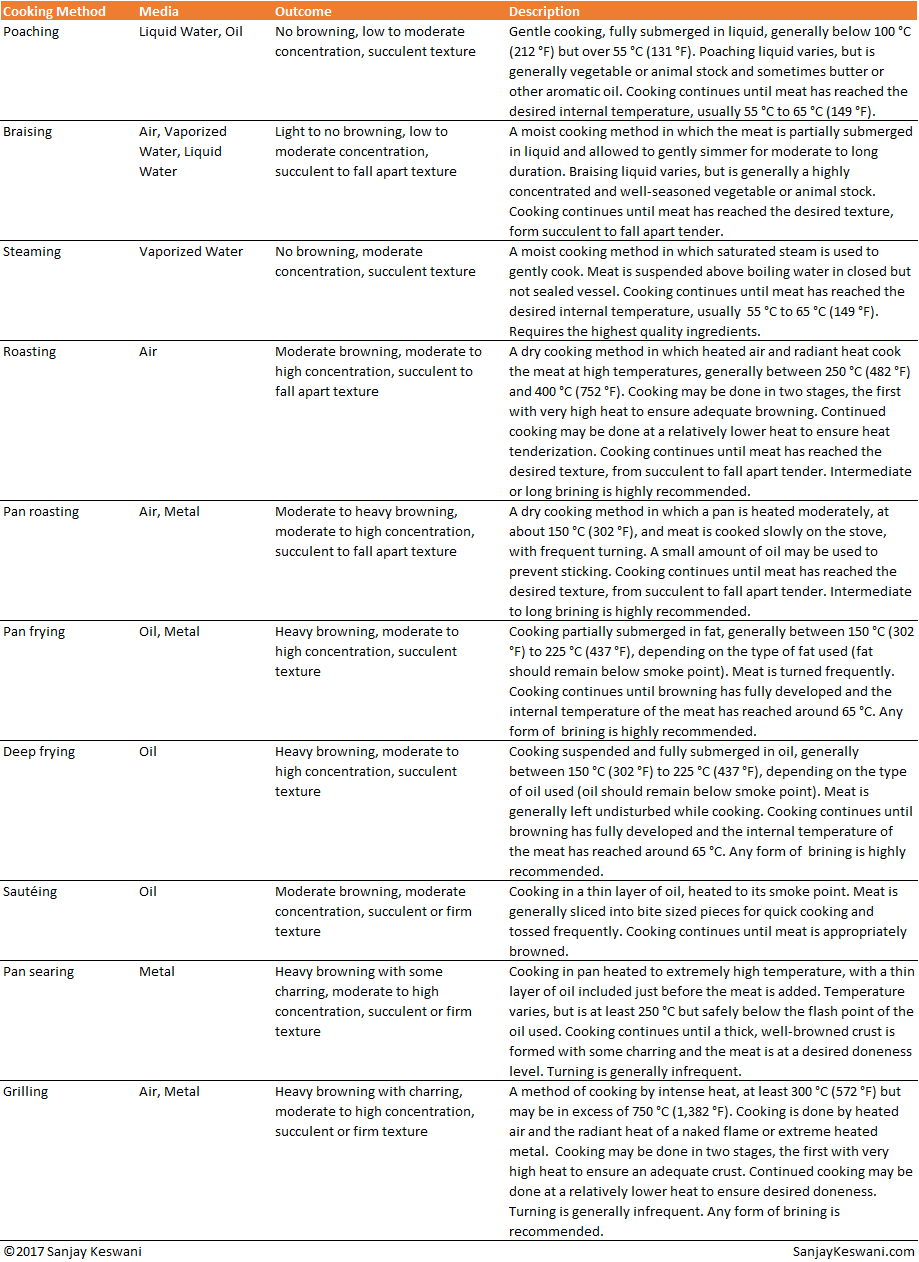 Over the next several months, I’ll begin to explore each of the cooking methods in more depth and with illustrative recipes to try your hand at each. There is so much more exciting stuff to come!