Tacos are a complicated game and what separates the bad from the good from the truly exceptional is going to basically turn on three things, by my view: The tortilla itself, the overall balance of tastes and what I call “mindful contrasts” within the taco filling and between the filling and the tortilla. What I mean by mindful contrasts, an aspect of composing a dish, is how you arrange the various elements of the taco (or any dish) to contrast each other, but specifically in a sensible or conscious manner. For example, having contrasting variations of texture consists of soft (roasted meat), chewy (tortilla), crispy (fresh vegetables) and crunchy (fried garlic chips), all in a single taco. Other contrasts might include cooking states (raw versus cooked), temperatures (hot versus cool), color (varied and literally contrasting), among others. These contrasts should be mindful in that they are not random; you should build-in contrasts that deliberately compliment and elevate one another.

You may ask yourself why we need to think so deeply about tacos. Tacos are, after all, simply a corn or wheat tortilla with some meat and vegetables in it, perhaps a bit of cheese. But, as it turns out, you could spend a decade of your life studying tacos in all their brilliant variations across Mexico (and, indeed, Latin America) and you’d never get bored.

Mexico itself has a proud and diverse history, one including a taco making tradition that spans literally centuries and reflects its history as a melting pot. The Mexican people are more than just indigenous peoples and Spanish immigrants, although those groups make up the majority. Mexico, like the United States and Canada, has seen global migration into its country from places as varied as Italy, Germany, the Middle East and East Asia. It’s also worth noting that there is a great diversity among the remaining indigenous peoples of Mexico. All of this diversity has, over the years, found its way into the taco, in one variant form or another. We tend to ignore this while lazily constructing our uninspired hardshell, Tex-Mex tacos at home. There is so much more to this, and below I (very humbly) scratch the surface.

Tortillas are the backbone of tacos. They are not the bland, boring envelope that hold your delicious fillings, but rather a co-star of your meal. They should have a fresh and concentrated flavor of corn, slightly roasted and ever so mildly sweet. The texture should be moist, but not overly so, and chewy, but not overly so. If you’ve never noticed how delicious a tortilla is in a taco, you have probably never really had a decent taco. The most likely reason that your tortillas have failed you is that they should be, first and foremost, as fresh as possible. Time is the biggest enemy of an exquisite tortilla. 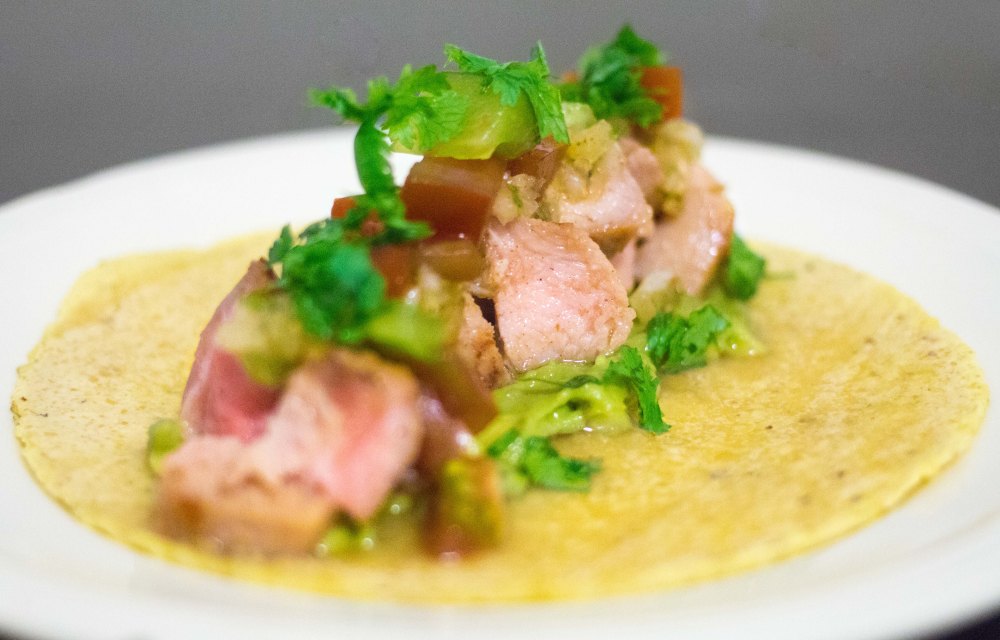 The big problem with getting the freshest tortillas possible is that they must start with the freshest maize (or corn) possible, which is then prepared traditionally into what is called nixtamal or whole hominy. The nixtamal is then ground and immediately made into a dough called masa de maize, then immediately pressed with a tortilladora, cooked through and eaten. (There is the matter of wheat flour tortillas, which are by my view specialty tortillas, useful for only certain milder flavored tacos, for example, certain seafood or vegetable tacos. This is a controversial view, however, depending on the company you keep.)

For most professional chefs, truly making tortillas from scratch in this manner is generally considered an impossibly complicated feat, especially during a rushed dinner service. For the home cook, forget about it. As a result, we will be making compromises, but we will try our best to minimize the damage to our time and pride.

Generally, the earlier you can get involved in the process, the better. If you can find good nixtamal, that’s amazing. If you can find preground and dried nixtamal, called masa de harina or maseca, you are still doing very well. But most of us don’t find ourselves in places where these ingredients are readily accessible nor do we have the time and patience to start making fresh tortillas. This leaves us in search of a fine, traditional tortilla maker. Which is to say, we are settling for merely good tortillas.

The best way to find fresh tortillas is to track down a local carniceria, tortilleria or Mexican bakery that displays a sign that reads, “Tortillas hechas a mano!,” or “Handmade tortillas!” These will generally be located in neighborhoods with a significant and dense population of Mexican immigrants. Such handmade tortillas would have been made that morning, so the freshness level is still quite high in the grander scheme.

If you don’t find yourself in such a place, however, grocery store tortillas are the next step down. That said, there is dramatic variation in grocery store tortillas. The biggest tip I can give you to ensure freshness is either to check the packaging of the tortillas for a “made on” date (which should be no earlier than the previous day or two) or to question the manager of the store about when tortillas of a particular maker are delivered. If they do a good job, it should be daily. If you find packages unmarked by a made on date and the store gets irregular deliveries, check to find a local maker. They’re most likely to be the freshest on offer. Never, never purchase national brands of tortillas or hard taco shells. These are always flavorless garbage.

Where tacos are concerned, “filings” is a term like “stuff.” It can refer to just about anything. Thus, your choices with filings are virtually infinite and I will not be presenting an exhaustive study of the infinite this day. Fillings are also where you can apply the concept of mindful contrasts. Since most often your tortilla is a fixed point of fresh, soft corn (although not always), most of your play in mindful contrasts will pertain to the filling. 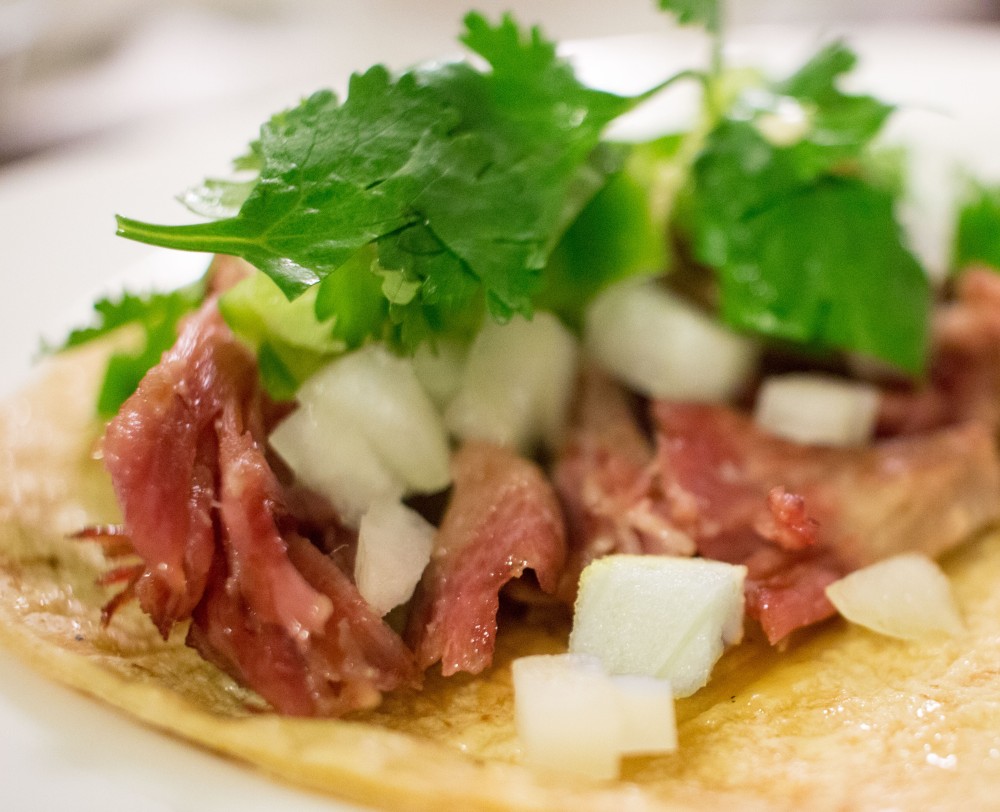 But to add some structure to how we think about this, I like to start in one of two categories based on seasonality: Fresh and rich. Fresh I associate with summer, gorgeous fruits and vegetables, ingredient forwardness, balanced richness and bright flavors. Rich I associate with winter, deep flavor, browning, umami, meatiness and noticeable but satisfying heft on the palette.

With fillings, as with many things, balance is key. With fresh tacos, tasting all your wonderful, bright produce is essential, so umami (which in higher concentrations can obscure nuance, blending flavors together and blurring them) needs to be light, acid relatively high, richness restrained. Simplicity rules and less is more. I recommend lighter cuts of meat such as pork tenderloin or chicken breast, restrained picante in any salsas or peppers you may include, and brightly acidic produce like tomatoes, tomatillos and citrus fruit. These tacos are the hardest to make because they demand the best of everything: High quality ingredients and exceptional composition, cooking and cutting technique.

With rich tacos, you can dial the loudness of your flavors up to boisterous. High umami, picante and fat are all on the table (although hopefully not literally). You can even balance that with some sweetness and a big punch of acid. The reason for all of this loudness is we may not have access to the best possible ingredients in the winter months and we want to obscure that with unrestrained volume. Often times, these tacos require the least skill to make, are the most forgiving on errors made during cooking and the most consistently satisfying. They do take longer, however.

For both fresh and rich, mindful contrasts are also important. This can be easier to achieve in fresh tacos. You naturally will have a variety of textures, cooking states, colors and temperatures between the meat and fresh produce you choose to utilize. Even so, keep in mind that you want to get some crispy in there (think raw onions, fresh radish or thinly sliced jicama).

The difficulty comes with the mindful contrast in rich tacos. Since your focus is usually first on the meat (which is generally soft) and your access to fresh produce may be restricted when these tacos shine best (in winter), you may find yourself scrambling for options. That said, preserved items such as lightly pickled onions add acid and crispness to a dish. Also, shelf stable items like sesame seeds can be toasted to great effect. Lastly, onions and garlic are usually available in all seasons, either (or both) of which can be carefully fried to crunchy greatness. Onions also work raw, of course.

But, as I often urge in matters culinary, learning is best accomplished by doing. In my next article, you’ll find two recipes, one for a fresh taco and the other for a rich one. Happy cooking!