I enjoy faceless corporate manipulation. Not so much because I approve of it, but more because it’s fun to watch just like a zombie film is fun to watch. True, we know what’s going to happen–fools will be separated from their hard earned money just like zombie victims from their limbs–but it’s the nuances in the execution that are the most entertaining. In other words, it’s not that the the young lady was separated from her cash or arm, the poetry is in how she was separated from her cash or arm.

The relationship between soil and water sustains life.
Earth and Ocean (e+o) food and drink is a lifestyle-inspired restaurant.
Through our cuisine, hospitality and décor, we will cultivate an
enduring relationship with each guest and surrounding communities.

Our food philosophy embodies the principals of wholesome
and organic products, hand crafted ingredients and a “from scratch”
preparation mentality. The natural harmony of “Earth and Ocean”
is the foundation of e+o food and drink.

Leaving aside the difference between “principles” and “principals,” and the exuberant and lofty arrogance conveyed in the mere fact that they chose to call themselves “Earth + Ocean,” this bit of faceless corporate manipulation is virtuosic. You may strike back, dear reader, and suggest that the lines from E+O’s menu are hackneyed cliché: Flaccidly referencing a variety of movements from sustainability to community outreach, alluding to “lifestyles” and evoking the bromic verse of a yoga instructor. And that’s exactly why its manipulative virtuosity. Because to like and to buy into E+O is itself a lifestyle choice, a concession to the suburbs and the intellectually facile mere allusion to things that are more important, difficult to achieve and far easier to just mention. There are people who would rather not think about all of this and those people are the target demographic of E+O. So I dare say again: Manipulative virtuosity.

To briefly set the stage for E+O’s concept and style, I’ll quote my brunch review of the restaurant: “The menu at first glance is perhaps best described as of the ‘glorified Cheesecake Factory’ variety. Chef Aglibot and team seem to be of the mindset of offering something to everyone–from Hong Kong-style lollipop chicken to gnocchi with pesto to maki to Argentinean gaucho ribeye.”

I said then that my experience with the dinner menu was insufficient to justify a full review. Well, that is no longer the case and everyone shall be the worse for it.

I started out my meal well enough with the brussels sprouts and kale. Shredded and combined with peppers, roasted in the oven at high temperature then tossed with rough chopped shrimp and a “sweet chili” vinaigrette; the dish was texturally very satisfying. The crunch of the browned vegetables was beautifully balanced by the vinaigrette, but when you take into account the sloppy cafeteria presentation along with the shrimp, chopped and desecrated (no self-respecting chef serves perfectly good shrimp rough chopped), the dish didn’t feel up to the challenge of leading a fine meal. Not that we were about to have one.

Cold smoked oysters, served in a garlic oil, were our next course. Curiously, the sous chef–who visited our table to chat about the menu–wasn’t clear with which wood the oysters were smoked. Of course, it really didn’t matter. Along with the heavy garlic oil, I could barely taste oysters in the first place. If I were absurd enough to eat them atop the rye croutons provided, I’m not sure I would have even picked up on an oyster texture.

Our first worthwhile dish was the croque. Constructed with a thick cut of brioche, layered first with beautifully fresh asparagus tossed in white truffle oil, a layer of pancetta, some béchemel roux, and topped with a sunny side up egg. Although the flavor was good and the dish had a nice richness, the combination of flavors was a bit dated for a modern “lifestyle-inspired restaurant.” The same flavors could have been found in a discount bin cookbook from the 1990s. I also question the baking of the dish with the brioche ending up slightly soggy, although not a complete mess. I would have rather had each component made separately and combined on the plate.

The duck and pickled daikon hash, served with a 60 degree duck egg and browned onions with overly generous frisée, was uninteresting but tasty. The cook on the duck, beautifully braised and finished crisp in the pan, was very satisfying but slightly overdone. The undoing of the dish was the imbalance in flavor caused by the overabundance of raw frisée. Even so, the dish was lacking elevation and was just too simplistic. Any moderately experienced home cook could have done this dish without feeling particularly troubled.

The chicken wings, a purported take on Hong Kong-style “lollipop chicken,” was simply a travesty. Made like sweet and sour chicken, in the tradition of Chinese-America’s answer to Texmex, the dish was hardly what I was expecting. In my experience in Hong Kong, lollipop chicken is marinated, fried to perfection and glazed with delicious, spicy-sweet sauce with hints of garlic, ginger, tamarind, sesame oil and a pleasing level of chili oil heat. Different takes on the dish, of course, abound in the cultural playground that is Hong Kong; but at its core, lollipop chicken is a delicious fusion of Asian flavors, distilled into brilliant chicken. E+O’s take on the dish was battered and fried, then glazed with a honey-sweet sauce and coated far too generously with white sesame seeds. With its generous layer of hideous sweet and sour-style batter, the texture of the meat was entirely lost. As a result, all I tasted was sticky-sweet grease, although the cook on the chicken looked very good.

The butternut squash soup was well prepared and smooth, with a roasty-sweet squash flavor, hints of butter and topped with soupçon of crispy browned onion. The soup was pleasing enough but was too straightforward and lacked the kind of elevation that would have made it beautiful.

While eating the “primaverde” flatbread pizza, I got the distinct impression that the kitchen had a bunch of ingredients, some of which were seasonal, and decided to toss them onto a flatbread: Kale, kabocha squash, sage, fontina cheese and olive oil. Although the ingredients did passably well together, it seemed like something that arrived on the table from an amateur kitchen. It was good enough, but not so good that I would pay for it with anything other than my good company. 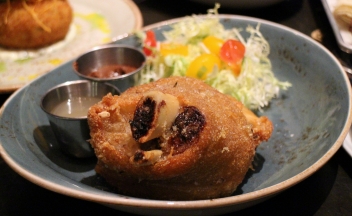 By now, you’ve gotten the idea. None of the dishes were all that bad, they were just pedestrian with technical errors ranging from minor to monstrous. Further illustration: The massive crab cake was accompanied by far too much richness in the form of avocado and lemon aioli, with just a smattering of acidic cumin vinaigrette in a failed attempt at balance. The carne asada was dry and the marrow bone shallow, the crispy pata–a filipino-style confit pork shank–was over-crisped and under-seasoned, the gaucho ribeye was overcooked and far too greasy, and the smoked pork carbonara was not satisfyingly smokey and the pasta overcooked. The whole experience was a tad underwhelming. 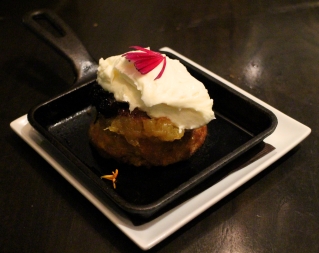 Dessert was the same story, although the presentation on the desserts were beautiful and delicate. The chocolate cake was decent, but with the edition of fermented cherries and cherry mascarpone, I was left scratching my head. The pineapple carrot cake was technically well-executed with refined flavor, but too sweet. The molten red velvet cake was perfect in texture, but the flavor was overwhelmed by the taste of the chemical food colorings used.

Where does this leave us, then? With E+O’s real principal principle: To cloak one’s uncouthness in the appearance of high concept and in the hope that no one will notice your facile lack of skill. In the end, however, the proof is literally in the pudding. And E+O’s markedly suburban pudding is hardly worth the trouble.